When the Marvel Universe teaches you how to read as a child, as it did with “Jimmy Kimmel Live!” writer Jeff Loveness, that tends to leave a lasting impact.

As he explains, Loveness possesses a strong affinity for these characters—Spider-Man, in particular—and channels that energy into a one-of-a-kind story teaming Medusa, Spider-Man and the all-new Captain America over the span of three oversized issues beginning monthly in March!

Marvel.com: How does an acclaimed writer for “Jimmy Kimmel Live!” decide to leap into the wonderful world of writing in the Marvel Universe?

Jeff Loveness: Marvel comics have been a part of my life for as long as I can remember having a life. They taught me how to read. It’s hard for me to talk to someone without X-Men somehow sneaking its way into the conversation.

So when the opportunity came to write for Marvel, I almost felt it was a trap laid by my enemies. So far, that has not been the case. I’ve written two stories: A+X #17, which paired Iron Man with Broo, and a story in DEATH OF WOLVERINE: LIFE AFTER LOGAN #1 which had Cyclops—my absolute favorite Marvel character—dealing with his complex feelings regarding Logan’s death.

Being able to write in both late night and comics makes me feel luckier than I have any right to be. They’re very different styles, so it’s nice to jump between the two and keep things fresh.

Marvel.com: Without giving away too much of the story you’re working on, how does Queen Medusa settle upon seeking the help of Spider-Man and the new Captain America?

Jeff Loveness: It’s definitely a focal point of the story. The Inhumans have always been isolationist in their existence, but the recent destruction of their home and relocation to New York has changed all that. They’re now forced to integrate and interact with the broader Marvel Universe on a scale they’re not accustomed to. It’s as if Mt. Olympus has erupted and now the Greek Dodekatheon have to slum it with the rest of us.

So for Medusa and the Inhumans, this is a story about learning to acknowledge your mistakes and vulnerability, and learning to open yourself to help from others. We can’t do it all on our own.

And y’know…sometimes Spider-Man just happens to be swinging through Greenwich Village and is down for a team-up. He’s a sociable guy.

Marvel.com: What kind of unique storytelling opportunities do you get to pursue playing such distinctive personalities as Medusa, Peter Parker and Sam Wilson off of each other?

Jeff Loveness: Part of the fun in writing this is discovering new connections between these three characters that, on paper, might not have much in common.

Medusa hails from a line of space-gods, recently devastated and forced to rebuild in the ruins of their former glory. She’s putting up a brave face for her people, but she’s not used to tasting vulnerability. It’s been exciting to explore that side of the Inhumans.

Sam Wilson is still pretty early into his tenure as Captain America. So, while he’s more than earned the shield, there’s always going to be this voice in the back of his head wondering if he’s good enough. He’s taking the mantle of the single-most iconic figure in the Marvel Universe. The pressure to not screw it up is enormous. Fortunately, Sam Wilson is the exact type of guy to hunker down, focus, and put in the work. This story will also showcase the unique advantages Sam brings to the playing field that Steve Rogers never had at his disposal. Bird powers can be handy sometimes.

And Spider-Man…well, he’s Spider-Man. What else is there to say? He’s the core of what I love about Marvel comics. He is the heart and soul of this universe.

The dynamic between Spider-Man and Medusa has been my favorite part to write so far. I don’t think Spider-Man comics have ever addressed this, but Peter Parker may or may not have a thing for redheads. It’s unclear. But seeing how Medusa is…Medusa, Mr. Parker may have trouble maintaining his concentration in the team-up.

Marvel.com: Are you enjoying concocting ways that Medusa uses her hair as an offensive and/or defensive weapon?

Jeff Loveness: Medusa’s definitely got a versatile power set. She’ll establish, early-on, that she’s one of the more formidable psychical powerhouses in the Marvel Universe. Her enemies may look at Medusa as a placeholder for Black Bolt, but I hope that this story fully portrays her as the true—possibly superior—leader she is.

Sorry, that was a ramble. To answer your questions: Hair powers are cool.

Marvel.com: Given your background in comedy, how much are you looking forward to concocting witty lines for Spider-Man? 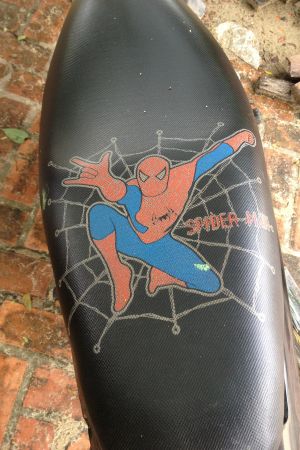 Jeff Loveness: Peter Parker may be the single-greatest influence upon my comedy style. In fact, when I first got the job at “Kimmel,” a job that requires you to churn out dozens of jokes a day, I would sometimes calm myself by sitting back and thinking, “Ok, what would Spider-Man say here?”

To finally write, officially, in Peter’s voice has been the honor of a lifetime. I hope I did him justice. If not, I will cry.

I’m feverishly working on a time machine so I can go back and tell my six-year-old self that I got to write jokes for Spider-Man. He’d probably scold me for selfishly abusing the space-time continuum/not preventing World War I, but I hope some part of him would be proud.

Marvel.com: You clearly have an affinity for Spider-Man and have for most of your life, what is it about his character that has always appealed to you?

Jeff Loveness: Because, moreso than any other super hero, Spider-Man stands for small, casual, down-to-earth kindness. He shows that humor beats darkness, perseverance beats depression, and that it’s often the weak, humble, overlooked people in life who have the most strength.

Last year, I was traveling alone in Southeast Asia—pretending like I was Wolverine or something—and I stopped in this river village to catch a breather. And in this remote, isolated place, I saw a guy with Spider-Man decaled on his moped. I couldn’t have been in a more random location—and Spider-Man was still there. Last week, I was on the bus heading home from Thanksgiving, and the kid next to me was wearing a Spider-Man sweater, pretending to web people. Peter Parker resonates with everyone, no matter who you are or where you’re from. That’s something special.

Plus, he gets to date women way out of his league. Isn’t that the dream for nervous, lanky people everywhere?

Marvel.com: While the story may seem like a straightforward attack on Attilan, is there much more to learn behind the reasons for this conflict?

Jeff Loveness: The story begins when an army of monsters attacks Attilan for reasons unclear to Medusa. I don’t want to give away too much right now, but as the story unfolds, our team uncovers a secret tragedy the Inhumans are responsible for, and also come face-to-face with a long-forgotten hero from the Golden Age of Marvel; one of the very first super heroes ever: The Red Raven.

He was created in 1940. Both Joe Simon and Jack Kirby worked on him. He’s older than Captain America, but no one knows who he is. So what happened to him?

While exploring the Red Raven’s origin story, we also explore the idea of super heroes themselves. He was one of the first; so what compelled him to become one? Is the super hero idea even a good one? Do they cause more harm than good? He’s both a celebration and indictment of super heroes. I’m excited to dive into the debate.

Marvel.com: Beyond the three heroes, care to talk about any of the supporting cast or some of the citizens of New Attilan readers will get to see?

Jeff Loveness: Part of what intrigued me about this project was the opportunity to spend some time with the newest Inhumans popping up like Flint, Inferno, and Naja. The Marvel Universe is wonderful because there are always new characters to flesh out. MS. MARVEL is a runaway success, Gerry Duggan’s made NOVA into such a fun character, and Jonathan Hickman’s reinvigoration of Sunspot has been remarkable. He took a New Mutant past his prime and made him one of the biggest players on the Avengers scene. It really showcases the beauty and versatility of Marvel.

I’m specifically drawn to Flint. He’s not a super hero. He’s this introverted, nervous kid with power thrust upon him. But with Spider-Man’s help, who becomes something of a mentor to these young Inhuman kids, he’ll come to see that the Marvel Universe as the big, colorful, weird place that it is and find his place in it.

Marvel.com: Are there certain writers of these characters that helped to inform your approach to writing this story?

Jeff Loveness: Jonathan Hickman and Jason Aaron are, flat-out, some of the greatest Marvel writers to ever live. THOR: GOD OF THUNDER #12 and the entirety of Jonathan Hickman’s FANTASTIC FOUR run make me openly weep in public places. Uncomfortable public places like bus stops and post offices. They’re perfect at mixing heart with huge spectacle, and I’m trying my best to learn from them.

Al Ewing’s pre-Axis take on Sam Wilson was fantastic in MIGHTY AVENGERS and gave me great insights into Sam’s mannerisms and character. Rick Remender’s ALL-NEW CAPTAIN AMERICA book has a firm grasp on that character too.

As far as the Inhumans go, I’m gonna once again gush about Jonathan Hickman because he wrote them in his FANTASTIC FOUR run with an other-worldly elegance that I can only hope to match. Paul Jenkins’ and Jae Lee’s INHUMANS [limited series] hit that wonderful note as well. These are beings beyond our understanding, now brought low and humbled; forced to dwell with normals like us. It breeds instant conflict, and it makes for great story-telling.

The action begins this March in AMAZING SPIDER-MAN SPECIAL #1 then continues in INHUMAN SPECIAL #1 and ALL-NEW CAPTAIN AMERICA SPECIAL #1 in the following months!