In 1964, Marvel premiered one of its enduring and exciting super heroes, Daredevil. Whether in his secret identity as blind lawyer Matt Murdock or using his enhanced radar senses, DD stood out from the crowd as an unrelenting crusader for justice.

To celebrate 75 years of Marvel, 50 years of the Man Without Fear and the upcoming debut of “Marvel’s Daredevil” on Netflix in 2015, we look back on the hero of Hell’s Kitchen’s remarkable history!

As another decade came to a shattering close for the Man Without Fear, Matt Murdock found himself up against the wall with macabre mysteries, sinister foes, and the impending death of one of his closet and oldest confidantes. 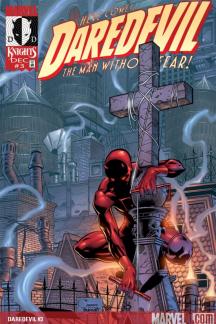 Matt’s friend Foggy Nelson stood accused of the murder of a client in DAREDEVIL #3, while our hero himself dealt with an alleged angel in search of a child reputed to be the Messiah. When all looked hopeless and even a visit to his mother failed to bring him illumination in DAREDEVIL #4, he steeled himself for a confrontation with his old foe Bullseye, hired by the evil Macabes to find the child.

The Sorcerer Supreme, Doctor Strange, came calling in DAREDEVIL #5 to warn Matt that he’d been fooled all along, even summoning the demonic Mephisto to prove it. When Daredevil and Bullseye finally clashed, Karen Page paid the price, felled by a bullet from the assassin’s gun. 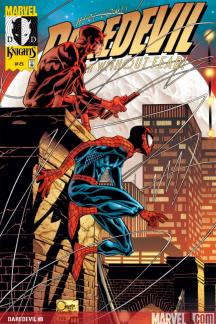 In agony over Karen’s death, Murdock discovered in DAREDEVIL #6 his true antagonist to be Mysterio, a master of trickery who posed as Macabes to run one final scheme before he died of cancer, as explained to Matt in DAREDEVIL #7. Unimpressed, DD thrashed the criminal soundly for his heinous misdeeds. Later, after Karen’s funeral in DAREDEVIL #8, and comforting words from both Spider-Man and Black Widow, Matt and Foggy renewed their partnership in a fresh new take on Nelson & Murdock, Attorneys at Law.

Following a run-in with a hitman hired by The Kingpin, Matt stood ready to lend support to Natasha Romanov in BLACK WIDOW #1, as she prepared herself to clash with Yelena Belova, a woman who coveted the role of the Widow. When Echo, a deaf girl with incredible powers of mimicry, heard her father had been killed by Daredevil, she planned to do something about it in DAREDEVIL #9.

Read Sample
BUY DIGITAL COPY
To bring another tumultuous year—and decade—to a close, Daredevil hunted down the Constrictor to recover a synthetic organ he stolen in GAMBIT #11, which put him at odds with X-Men’s resident Cajun mutant.